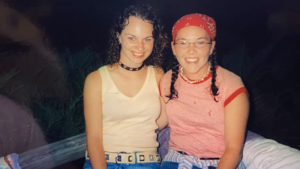 Songs, games, sunscreen, friends – these are all common words that bring memories of summer days and summer camp.  Camp can look like many different things – there are day camps and overnight camps; boys camps, girls camps, and coed camps; there are sports camps, art camps, general camps, and medical camps.  The list can go on and on, and to each person that has been fortunate enough to experience life at camp, I’m sure they are grateful for every moment and whether they liked it or not – found that they grew and learned a lot about themselves.

When I was 12, my parents heard that a local Rod and Gun club was sponsoring children to attend a Department of Environmental Conservation Camp in the Catskills Mountains of NY.  I ended up earning one of those sponsorships and headed to Camp for a week-long overnight adventure.  I was nervous.  I had never spent time overnight without my family or friends.  Was I going to have fun?  Were people going to like me? What if I needed something?  Was I going to be able to sleep with all the bugs and animals?  Was I going to miss my family?

What that single week at Camp did for me was more than anything I could have imagined nor really understood till years later.  My twelve-year-old self had an absolute blast!  I learned a game called Ultimate Frisbee (which was gaining in popularity), I took a hunter’s safety course (even though I never dreamed of going hunting), I learned about the environment and our impact on the earth, and I completed a midnight hike in the forest.  I met new friends who were awesome and different from me.  I had kind and crazy counselors.  I sang at the top of my lungs until my throat hurt, and laughed until tears ran down my cheeks.

Looking back at that week and the two more summers I spent returning, I grew immensely from the experience.

I became more independent.  Camp gave me the confidence that I could do things on my own – like being responsible for my own cleanliness and completing chores such as sweeping the cabin and being a waiter for our table.

I gained a desire to lean into new experiences because oftentimes, it meant I found something exciting and fun!  I keenly remember completing the polar bear plunge – sitting under a trickling, freezing waterfall and being named a true polar bear by biting off a chunk of moss.  The Camp Staff made such a big deal out of each accomplishment.  I found I could do hard things!

The people I met were from all over the state of NY.  As a small microcosm of middle-school-aged children, I learned about my friends’ home-life, about their different schools, and about what they believed in.  In reflection, what I took away was a newfound knowledge that people truly experienced life differently (something a bit eye-opening for a rural, middle-class girl).  Despite having varying backgrounds we all shared an experience at camp that brought us together and bonded us.

Not all the lessons I learned were fun to experience, but they were valuable nonetheless.  I was homesick during my time at camp.  I missed the familiarity of home, and I missed my parents and sister.  What I came to realize was that it was OK to miss them.  It was also OK to have fun and experience something without them.  I learned to be resilient through their absence and that I would be OK.

I also had moments of fear.  I was going to sleep out under the stars where bears and coyotes lived with no other protection than a tarp!?  I didn’t know if people would like me or if I might get embarrassed by doing something wrong.  What I learned is that I could face my fears and conquer them, especially and most importantly through the support of people around me.  I learned to trust strangers.

My final take away from those three summers at Camp was the power of giving thanks.  At the end of my first summer experience, I returned to the Rod and Gun club that sponsored me and presented them with all the fun I had.  As a 12-year-old, I didn’t really understand all the true growth of the experience, but I’m sure the adults did.  I believe it was due to my gratitude that I was then sponsored for the following 2 summers.  Each year, I returned to tell them what I learned and enjoyed. 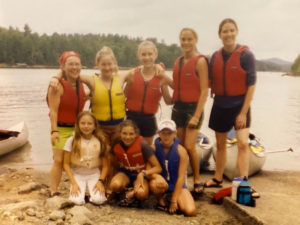 Fortunately, my camp experiences didn’t end there.  Once I graduated from college, I returned to a different summer camp as a Counselor.  Still young and learning the ways of the world as an adult, my growth and development continued with my next few years as a staff member.

I no longer needed to worry about homesickness, or fear of wild animals, or what new experience I would try.  Instead, I was unconsciously looking for who I was to become as an adult.  Where was my home?  I certainly didn’t belong living at my parents any longer.  What would I choose to do with the “extra” cash that I felt in my pocket?  What kind of decisions would I make when responsible for people other than myself?

Again, as I look back, I didn’t know these were the things I was going to learn during my time as a camp staff member.  I thought it was going to be a lot of fun, as I recalled fond memories of my camper days.  It appeared like a great way to spend my time before I got a “real job”; hopeful I would get a teaching job at the end of the summer.

In reflection, I learned that “home” is where you can be yourself.  More important than the “brick and mortar” of a building was surrounding myself with an environment that I enjoyed, where I could stretch my potential, and where I could trust the people around me.  (Not so different than when I was 12 years old).

I learned that I could make good decisions about, and for the campers, I was put in charge of.  I also learned that if I was unsure, there were people above me that could provide me with solutions and direction to aid in decisions.  By working hard and being flexible, I found I was given far more privileges – choice for my night off, assigned to the activities I like best, and being asked for my opinions in the future development of the camp.

I discovered anything was possible if you just asked.  Pillow fight on the front lawn – yes, if you had approval from the Head Counselors.  Put a canoe on the roof of a cabin – sure!  As long as the maintenance crew knew and could help.  If your supervisors are aware of what is going on, they are far more likely to allow it or support your decisions.

I was introduced to managing my own money and failed miserably that first summer.  It’s easy to spend money while simply having fun, but it’s also incredibly important to be financially responsible.  I could have saved so much more and made the coming year easier on myself.  Lesson learned; I didn’t make that mistake twice.

I can honestly say that my years at camp truly shaped who I am today.  I learn some incredibly important life lessons that helped me succeed and enjoy life:

I decided to make it my career choice.  I left the bureaucracy of traditional academics and chose to pursue a career in youth development focusing on important life lessons like grit, social-emotional development, and the 40 developmental assets.  Camp does all these things for children, and I am so appreciative to have been given the opportunity to experience it myself.