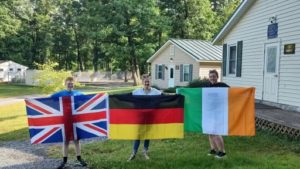 At Camp West Mar, in the beautiful Catoctin mountains, the YMCA of Frederick County is hosting International students as resident camp counselors for overnight camp this summer. We would like to introduce them to you.

I am a massive football (soccer) fan and am very excited to share my love for the sport with the campers. I know that many campers will themselves be fans of English teams and English players, so I am looking forward to getting their perspective on things.

I want to try everything American; that is what coming here is all about. I’ve already experienced so many “Americanisms” in my first few days here, whether shopping at Walmart or eating at fast food chains like Taco Bell and Chipotle, but I know there is always more to see and do. I wouldn’t say I have a bucket list of specific things; I just want to collect as many experiences as possible while I’m here.

What are you hoping to share with campers about your home country?

I expect the campers will have many different questions about Britain and what it is like to live there. I only hope that by answering those questions, I can give them a positive sense of British culture and the British way of life (such as it is). Above all, I hope to show them Britain is similar to the United States in terms of its values and commitments but different in other respects.

Why did you choose to come to Camp West Mar?

I met Y Camp Directors George McDonnell and Jenny Borton at a camp fair in London earlier in the year. Their friendliness, transparency, and enthusiasm for Camp West Mar automatically drew me in. I especially liked that West Mar is much smaller than other summer camps, making for an intimate, close-knit community. I am a massive history buff, so the camp’s proximity to Washington, D.C., was another big draw.

What do you love most about your home country?

If there is one thing I honestly think Britain does better than any other country, then it is comedy. The British sense of humor is unrivaled, and I am looking forward to sharing it with the campers and my fellow staff members over the next two months.

Even though we did this in Germany, and it’s nothing new for me, I look forward to the evenings together around the campfire because it was always one of my favorite camp activities. It’s a great opportunity to talk about the day, share some stories, and spend some quality time together.

There are many things that I am excited about and many differences from my home country that I have experienced already, but I think the most I am looking forward to trying some real American s’mores.

What are you hoping to share with the campers about your home country:

It would be nice to share some of the Camp traditions that I experienced and grew up with in Germany, like several games, camp snacks, activities we used to do, and maybe some German words.

Why did you choose to come to Camp West Mar:

Because I think it’s nice to work in a smaller camp, where you can socialize with everyone and quickly grow into a camp family, both with the staff and the kids. But also because I like the camp with its breathtaking landscape.

What do you love most about your home country:

I guess I would have to say the food!

We don’t have summer camps like this in Ireland, so I don’t know what to expect, but I’m looking forward to getting to know the counselors and campers to learn about camp life. I’m also really excited about trying so many new things such as songs, activities, games, and other traditions that are not unique to camp but unique to Camp West Mar.

Where to begin! There are so many to choose from that it is impossible to narrow it down, but I’m excited to try some of the American food that we don’t have in Ireland, particularly the fast food and some of the candy and snacks that we see on tv and in movies.

What are they hoping to share with the campers about their home country?

I would love to share some Irish traditions with the campers. A massive part of Irish culture revolves around food and the arts, such as language, song, and dance, so I’m excited to hopefully share some Irish meals and introduce new songs to camp. It would also be cool to teach the campers some Gaeilge – the native Irish language.

Why did they choose to come to Camp West Mar?

The other camps I looked at were missing the wholesome family environment that seems almost unique to West Mar. Being so far from home, this was important to me when choosing my camp. One motivator for being a camp counselor was to learn new things. I’m excited about all of the activities at Camp West Mar, where I’m hoping the campers will be able to introduce me to some American camp traditions! Overall, Camp West Mar looked like somewhere where I would have loved to spend my summer as a kid.