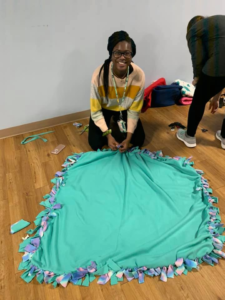 Since I was enrolled in Pre-k I’ve celebrated Martin Luther King Jr.’s accomplishments on the third Monday of January each year. I colored pictures of him, highlighted and read passages about him, and even had huge assemblies for him as well. Martin Luther King Jr. is a household name and icon, most referred to as “MLK” and is idolized for the non-violence approach he used during leading protesting in the Civil-Rights movement. MLK was a minister and was a natural public speaker which resulted in many of his preachings being turned into well-known quotes, his most popular one being his “I Had A Dream” speech where he spoke about his dreams for a unified future between all kinds of people. Mr. King had an impact on not only movements across the world but also had an impact on how people treat each other today to this day.

“Nothing in the world is more dangerous than sincere ignorance and conscientious stupidity” – Martin L. King, Junior. Whether it was the dirty looks people gave my parents when they spoke their native language or the curled up look I saw on some of my classmate’s faces when my mom packed me ethnic food, I have seen the true dangers of ignorance on people and its effects on peoples outlook. Most times, I meet this type of behavior with anger and rage but slowly I’m learning that the best way to educate people is to one; ask questions, and two; firm education and response. Mr. King has inspired me to take a mature and less hateful approach to educate ignorant people and has also inspired me to learn to ground myself so I can be received the way I want to be received.

Currently, people have just been educated about the years-old injustices against groups of people all over the world and have been taking action to fight against these injustices. This is great and all but what actions really make a difference? Reposting Instagram posts and ranting on your Snapchat stories is a great first step especially since we are in a pandemic but what can we do to take action in these trying times?  Mr. King said, “Everybody can be great because anyone can serve”. I believe one way you can truly help people is by helping your communities inside out through service. Service has an extremely huge impact on yourself and others in your community but how can you implement the practices Mr. King preached about at home, in your neighborhoods, and in cul-de-sacs? Well showing love to others by donating food, clothes, and toiletries to local causes is a great way to serve your community in a pandemic as Martin L. King, Junior intended.

Martin Luther King Jr. impacted my life and many others and he and his word continue to be celebrated on the third Monday of January every year.